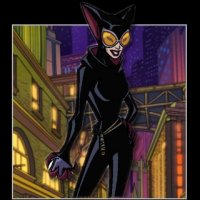 Catwoman is Gotham City's greatest cat-burglar. Agile, smart, charming and tough, Catwoman develops a love/hate relationship with Batman, often working with him when it suits her schemes (usually when she is in an argument with another villain), but such team-ups are always temporary. She is a capable opponent, often matching Batman in combat and escaping capture. She first meets Batman when she attempts to steal from yakuza boss Hideto Katsu; in their first fight she steals Batman's utility belt, but later returns it when they team up to fight Hideto Katsu's ninja henchmen. ("The Cat & The Bat") She later teams up with the Penguin, but he betrays her and she temporarily works with Batman to defeat him. She eventually switches sides again to avoid capture, escaping with the Penguin. ("The Cat, The Bat, and the Very Ugly") She has also fought with Ragdoll ("Ragdolls To Riches") and the Joker ("The Laughing Cats"). She is one of the villains who were kidnapped by the vigilante "Rumor," caught in the middle of an art museum heist thanks to intervention by the Penguin. ("Rumors"
Retrieved from "https://thebatman.fandom.com/wiki/Catwoman?oldid=3859"
Community content is available under CC-BY-SA unless otherwise noted.